I’m stuck in the reflection of myself
As a small child, palms up and beseeching.
Only children embody helplessness
In a way that makes vulnerability crumble.
I keep my palms together most days
Parting to graze objects on my path:
Telephone poles, fences, overgrown
Weeds that make way to barricade the streets.
The inanimate is a reminder that
If forgotten we will not fall
From the face of this earth.
I’m sometimes submerged into the lines
On my palms as if there were a secret
As if to uncover something I didn’t
Already know about the fronts and
Backs of my hands.
Hands tell a story and for some
The story is hands up,
whereas others clasp hands
A showmanship of strength or
Solidarity — the status quo
That wraps tightly around the fingers.
A story of constraint.
In Hindu mythology the image of
One open palm facing upwards,
One open palm facing downwards
Indicates the balance between teaching
And learning, the concept of
Grasping that which flows towards us
And releasing that which flows away.
Palms forward and eyes closed on
City streets I worry that I am only
Capable of receiving,
Only capable of taking —
Feeling an infinite chasm of want.
Chasing lonely men down city streets
Palms forward singing the song of
A caretaker who knows that all
Giving is a form of receiving.
Palms open and gripping the tenacity
Of being a being in space
I open to receive, I open to
Forget and thus impart.

I too am tempted
To move in the direction of protection.
To allow myself to fall
Into disarray until the debris
Creates its own foundation for
Barricading old entryways.
I too am tempted to
Bubble up inside like this
Natural spring and after giving
Too freely for centuries
To build a replica of myself
With the sole addition of
Fences and new rules that are
Closed to public consumption. 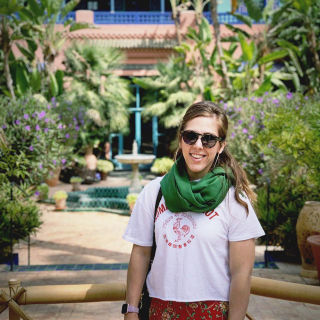